Willie Watson, a founding member of Old Crow Medicine Show, released his first solo album on May 6, entitled “Folk Singer, Vol. 1” and recorded at David Rawlings and Gillian Welch’s Woodland Sound Studios in Nashville. All ten of the songs are classic folk or blues tunes – none original – and many are not particularly well known. I’ve listened to the album five times, and though I didn’t like it the first time, I’ve liked it every single time since.

The album is extrem 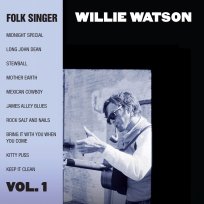 ely sparse, and Watson’s voice is every bit as distinctive – and almost as old-timey (in a very different way) – as Pokey LaFarge’s. I have to admit, I don’t personally care for that combination of both high AND nasally, which is what grabbed me on the first listen – but I really respect this work, and I applaud Watson for the album. When he opens his mouth and sings, you feel like you’re hearing what’s actually inside the man coming out, nothing left to show. Watson knows how to find the true spirit of these songs – and I have to admit that that high, old-timey reach I usually dislike is particularly helpful when wailing on a tune like “Mexican Cowboy.”

It’s all more than enough to compensate for any personal distaste I may have – a particularly impressive feat since, as the liner notes note, it’s “a true solo album in every sense. Watson is now center-stage, armed with an acoustic guitar, banjo and the occasional mouth harp.” It’s all very simple,  music a lone person could recreate on a lonely porch – pretty much what folk, at least when it’s solo, should be. Certainly what acoustic blues should be.

And to that effect, it’s worth noting that this is almost as much a blues album as it is a folk album. There’s a great rendition of “James Alley Blues” as well as “Mother Earth” and “Keep It Clean.” On Mother Earth, it’s Watson’s blues guitar that lifts the song as much as it is his voice, helping round out the album’s sound.

Nothing on the album is particularly innovative or new, but that’s okay. These are songs that need to be kept alive, and a lot more folks – especially young folks – listen to new albums than old ones. With this album, Watson is carrying on the proud tradition of old folk classics. In that particular regard, it reminds me a little of Pete Seeger’s “American Favorite Ballads” series, and I look forward to volume two. We certainly can’t let “Midnight Special” or “Stewball” die, and I’m thrilled to have been introduced to Charley Jordan’s “Keep It Clean.” Watson also does one of my favorite versions of Utah Phillips’ “Rock Salt and Nails.”

3.5 whiskey bottles out of 5, and it’s more a 4 than it is a 3. It’s too sparse for heavy rotation, with big exceptions for the wonderful “Rock Salt and Nails” and “Keep It Clean” – and like I say, I look forward to volume 2.