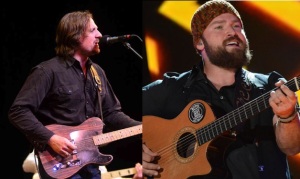 Huge news for the best new name in country music: Zac Brown has asked Sturgill Simpson to open for two New Jersey shows on July 10 and 11!

I had planned to see Sturgill open for Pokey LaFarge in Virginia on July 10. But last week, I learned about ZBB’s invitation after Sturgill had to cancel the Virginia gig plus one in Boston on July 13. The news wasn’t public yet and the person who told me didn’t realize I was a blogger, so I waited to post it. But, though no one seems to have reported it yet, it’s officially on ZBB’s site now!

This is Sturgill’s biggest break yet, far bigger than opening for Dwight Yoakam last year. No, New Jersey isn’t exactly a hotbed of country music, but opening for an act as big as Zac Brown will give Sturgill some attention and credibility with a crowd that may not usually pay attention to NPR, the New York Times, or even Rolling Stone – sites that helped propel his second solo, independently produced album to a #11 debut.

If anyone in the country industry was going to give traditionalist Stugill a hand up, it makes since that it would be Brown. He took the bro-country bull by the horns last year when he publicly called Luke Bryan’s “That’s My Kind of Night” “the worst song I’ve ever head.” No, Brown’s music isn’t exactly country, but I don’t say that as a criticism. It’s still roots music — Southern rock, and Brown is the first to call it that rather than country — and if you get past the beach-living singles, his first two albums were really good stuff. If I’m in the car for more than two hours, I’m playing “You Get What You Give” — I call it my roadtrip fuel. If there’s any major mainstream-country concert crowd that will appreciate Sturgill, it’s probably Brown’s. If nothing else, it will certainly help him get noticed by the entertainment reporters who cover Brown.

It’s particularly good news for country music, since it comes shortly before Brandy Clark goes on tour with star Erich Church this fall. Church might be a real asshole and his music isn’t perfect, but it is some of the best on “country” radio right now. Obviously we can’t expect Luke Bryan or Florida Georgia Line fans to hear a new, true country act and suddenly love it, but Church or ZBB crowds just might – and again, there’s the entertainment press that covers them.

I have every intention of driving up to New Jersey for the show, and will of course review it here. You know what Sturgill opening for ZBB kind of reminds me of a little bit is George Strait’s big break. In 1983, Eddie Rabbit got sick and had to cancel a performance at the Houston Livestock Show and Rodeo. Strait, just off his first #1 hit, was called in as a last-minute replacement – and 31 years, 20 more Houston rodeos, and 59 more #1 hits later, he’s finally retiring from touring. It broke my heart to miss his final show down in Dallas – but maybe, just maybe, I’ll get to watch a new legend take off the very same summer another one wrapped things up.