There are no more piano dancing or knee slides, but even at 66, the Boss rocked Hartford, CT, for more than three hours last night, even crowdsurfing across the entire pit as part of the E Street Band’s “The River Tour.” 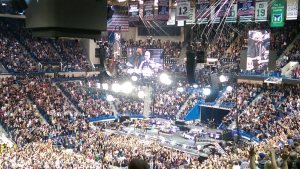 While I will never get tired of screaming along to “Born to Run,” “Thunder Road,” and “Dancing in the Dark” during the encore with the house lights up, the highlight of my fourth Springsteen concert in ten years was Nils’ extended guitar solo on “Because the Night.” It was the greatest guitar playing I have ever seen live, bar none, HOLY WOW. I couldn’t believe what I was hearing/seeing!!! I’ll remember that one forever.

As I noted, this was part of The River Tour, which means that every night, the band plays the 1980 album “The River” in its entirety. That made the concert a bit different than most E Street Band shows, with a lot of deep cuts showcasing the Boss’s excellent songwriting and the coherence of an emotional album (Drive All Night? Independence Day? The River itself?) to really create an intimate feel. It also meant less room for crowd favorites. There was no Born in the USA, no Glory Days, and nothing post-Rising. The band intros were also less theatrical than usual, and Patti Scialfa took the night off.

But there were plenty of other highlights to make for a great night:

I think Springsteen will keep playing for another 20 years, but we’ll likely see more and more of his acoustic and folk-rock sides. As its members age – may Clarence and Danny rest in peace, we miss y’all – the E Street Band is probably nearing the end of its raucous run. I’m thrilled I’ve gotten to see them three times in the last ten years (in addition to non-E Street Springsteen shows); I hope this wasn’t my final one. Thank you for a great night as always!

This Thanksgiving and every day, I’m thankful for a good Boss.

I attended my first multi-day music festival last month, and it was amazing. I spent three nights camping alone at Delfest, mostly a bluegrass festival but with some rock and Americana thrown in, on the West Virginia / Maryland state line. It was all I had hoped it would be. I went for Jason Isbell and the Steep Canyon Rangers; I stayed for Nora Jane Struthers, the Seldom Scene, Old Crow Medicine Show, and so many more.

While life is life and laziness is laziness, it’s very important to me to bring this blog back, whether all at once or slowly over time. Though it’s a few weeks late, I’d like to start with Isbell’s set at Delfest on May 23. He had the 8 p.m. set, so while not quite a headliner, he did have the first set of the night where only the main stage was open, and played as the sky went from full blue to full back. 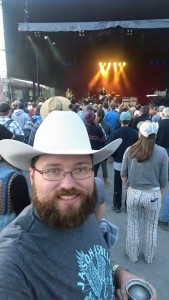 He was amazing. If you don’t know Jason Isbell and the 400 Unit, you HAVE to listen to Southeastern NOW, and then Live from Alabama. Southeastern is certainly one of my ten favorite albums (its depth and personal messages came out at just the right time for me), and after hearing him live, Isbell graduates from one of my ten favorite artists to one of my three (with George Strait and Bruce Springsteen). He’s certainly the best working songwriter today; the Townes Van Zandt of our generation. I won’t go into too much detail since this is a concert review, not an album review. But I do want to highlight three very special moments. If you’re interested, you can find the full setlist here (there was a decent amount of DBT material).

So girl, leave your boots by the bed, we ain’t leavin’ this room
‘Til someone needs medical help or the magnolias bloom
It’s cold in this house and I ain’t goin’ out to chop wood
So cover me up and know you’re enough to use me for good

I’ll be out of town for his upcoming DC-area show at Merriweather Post Pavilion and won’t have moved to New Haven in time for his show there, but I just might have to roadtrip to Philly to see him there next month. I can’t say enough about Jason Isbell. If I can only introduce friends and readers to one “new” act, this has to be it. Like I said, he’s our Townes, but also with two important Southern touches – big guitars and sweet tea to sip while you rest – to go along with the powerful, personal, very-real lyrics.